Search for a tool
Templars Cipher

Tool to decrypt/encrypt as a Knight Templar. Knights Templars Ciphers is a substitution code replacing letters by symbols from the Maltese Cross, icon of Order of the Temple.

What is the knights templar cipher? (Definition)

The Knights Templar cipher is a substitution cipher that uses 25 symbols to represent the letters of the alphabet (the letter J is missing, which is usually replaced by an I). The symbols used by the Templar alphabet are pieces of the Maltese Cross. 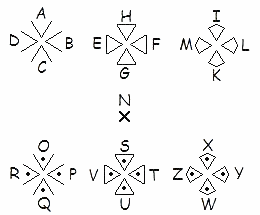 To encode a message, replace each letter with the corresponding Templar symbol:

Some sources have the letters L and K swapped.

Templar decryption requires converting each symbol to their corresponding letter.

Some sources have the letters L and K swapped.

How to recognize Templars ciphertext?

The ciphered message is made from symbols with angles, triangles, with at most one dot per symbol.

The message has at most 25 distinct characters.

Any reference to the Knights Templars or Solomon's Militia (with a reputation of killers/assassins) is a clue.

The Pig-Pen cipher and Rosicrucian ciphers are similar.

Why is the J letter missing?

The letter J did not exist when encryption was invented, it was a graphic variant of the letter I, and the J only appeared around the 16th century.

Who created the Templar Cipher?

The cipher was created by the Templars, the name given to members of the Order of the Temple, a religious and military group from the Middle Ages.

When was the Templars Cipher invented?

Thanks to your feedback and relevant comments, dCode has developed the best 'Templars Cipher' tool, so feel free to write! Thank you!