Search for a tool
Pigpen Cipher

What is the PigPen cipher? (Definition)

Pig-Pen Encryption uses 26 symbols to represent each letter of the alphabet by mono-alphabetical substitution.

Symbols are created using a 3x3 grid, crosses and dots. Digits do not have symbols.

How to encrypt using PigPen cipher?

The Pigpen correspondence table is:

Multiple variants exist for the creation of the alphabet and each changes the association of symbols and letters (see below).

How to decrypt using PigPen cipher?

PigPen decryption consists in replacing each symbol by the corresponding letter.

How to recognize PigPen ciphertext?

The ciphered message is made from symbols with right angles which sometime has a dot (1 symbol out of 2 has a dot).

The message has a maximum of 26 distinct characters.

The presence of pigs, pens, gate or farm are clues.

The reference to Charles M. Schulz's comic book Peanuts reminds us that one of his characters is called Pigpen.

What are the variants of the Freemason's PigPen cipher?

It exists multiple variants for associating symbols and letters.

The original version combines the letters in this order: 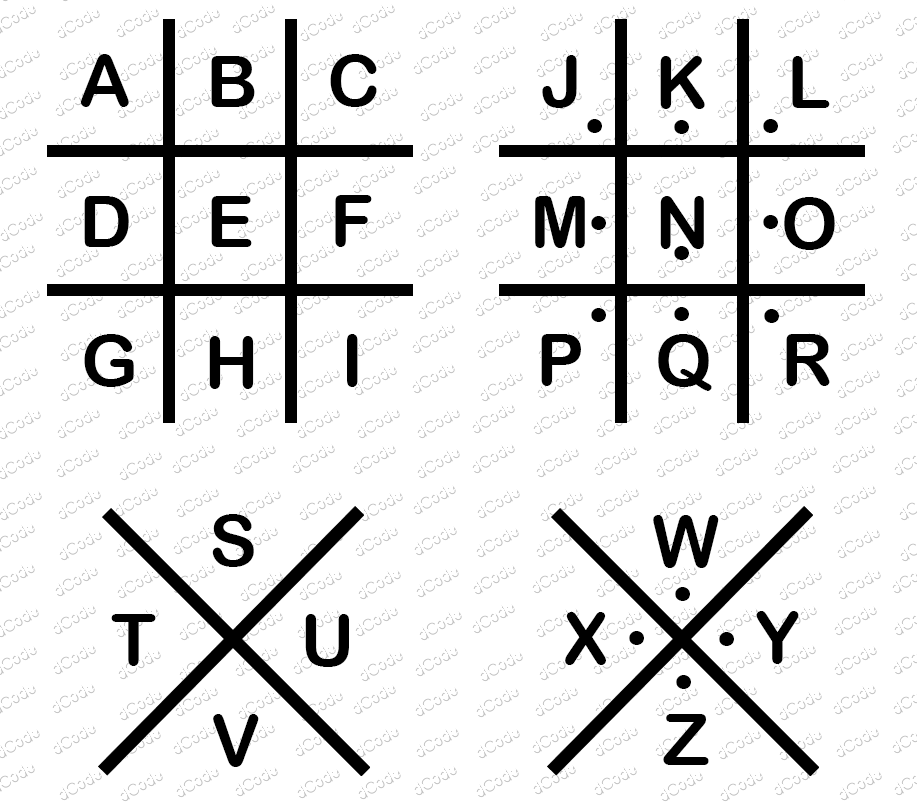 However, variations exist, here are those identified by dCode:

The Knight Templars cipher or the rosicrucian cipher are very similar and have very close symbols.

Why was Pig Pen cipher created?

Used by the Freemasons, this encryption allowed a written correspondence relatively difficult to decipher.

Why this cipher is named Pig Pen?

Symbols can be assimilated to pens and dots could be interpreted as small pigs.

When PigPen was invented?

PigPen appeared in the 18th century

The copy-paste of the page "Pigpen Cipher" or any of its results, is allowed as long as you cite dCode!
Cite as source (bibliography):
Pigpen Cipher on dCode.fr [online website], retrieved on 2023-02-08,