Search for a tool
Morse Code

Tool to decrypt/encrypt Morse code. Morse code is a system allowing to code a message by short and long impulsion. It is one of the first telecommunication code.

Morse code assign to each letter, digit, or punctuation sign, a unique combination of signal made of short and long impulsions (usually represented with a dot . and a dash -).

The alphabet or complete table of Morse Code is

Impulsions can be electric, acoustic or luminous. Any telecommunication format is possible.

How to decrypt Morse Code cipher?

Morse decryption/translation in English uses the same alphabet as encryption, but in order to accelerate the translation process, decoders use a tree like this:

How to recognize Morse Code ciphertext?

The ciphered message is mainly composed of dots and dashes (or sometimes, any other couple of characters).

Morse code is an auditive code, any long and short bip sounds, it can be Morse

Same with syllables in I or E for short and A or O for long.

How to write Morse Code?

There is not really a good way or official method of writing Morse. It is first a sound code. Visually the written Morse code should be arranged on the same line. Computers, however, has trouble writing it with the dashes - or _ and the dots . which are not at the same level.

The key is to differentiate the characters: example ▄ (short) and ▄▄▄▄ (long).

How to decipher audio MP3 Morse?

Listen the message and type simultaneously on a keyboard . (dot) for a short/acute sound and - (dash) for a long/grave one.

How to decipher Morse without spaces?

Morse deciphering without separator can be cracked, but hardly, as possibilities are exponential. dCode has some tools, such as a brute-force attack or a dictionary attack.

What are the variants of the Morse Cipher?

It is possible to replace the two characters for short and long by others like A and B for example. It is even possible to switch them in order to fool the decoder.

There is a fairly well known overencryption: Fractionated Morse cipher.

What is the mountain Morse code?

A variant encodes morse with a kind of mountain profile: 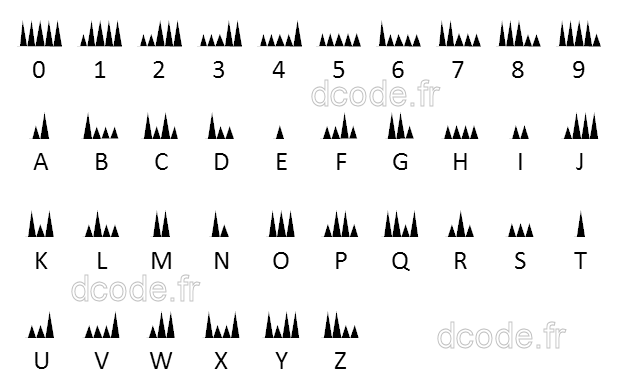 How the Morse alphabet has been created?

There no real rules, however, frequent characters (E, T, A for example) are coded with short signals (1 or 2 impulsions). The less frequent letters are coded with 4 signals maximum, digits with 5.

How the learn the Morse alphabet with mnemonics?

Many methods are used, the principe is to remember 26 words, and with these word find the corresponding association between a letter and its code.

Here is a list of words where each vowel is a dot, each consonant is a dash.

Example: V is described by oooh, that has three vowels and one consonant, so V is coded in Morse with ...-

Example: PSYCHOLOGY, begins with a P, and contains 2 syllables in O, P is then coded in Morse .--.

To train yourself, morse code kits are available (for children and adults) to transmit Morse here (link)

How to send a SOS in Morse?

How to mark the end of a character in Morse?

In practice, when a letter is finished, the morse encodes the end of a character with empty sounds (silence) or empty visual a bit long. When retranscribing, a slash / or any separating character can be added.

Why Morse has this name?

Morse code was developed by Samuel Morse, an American scientist whose name he kept. Morse therefore has no meaning or relation to the walrus animal (morse in French).

When the Morse was invented?

Morse Code was invented in 1835 by Samuel Morse

Thanks to your feedback and relevant comments, dCode has developed the best 'Morse Code' tool, so feel free to write! Thank you!